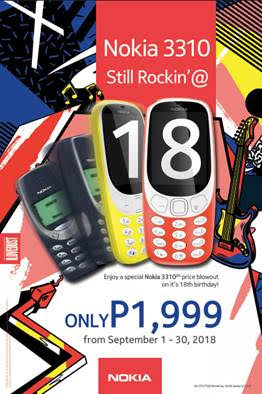 The reimagined Nokia 3310 in 2G with chic new colors and a retro user interface, is now available for only Php1,999 as an exclusive offer for its anniversary. Nokia fans can enjoy this promo from September 1 to 30, 2018.

The much-loved Nokia phone was introduced in 2000 and has become the most popular Nokia handset before touchscreen phones invaded the consumer scene. Back in the day, it was considered the embodiment of reliability and durability—which rings true today with new generation of Nokia phones.

Shannon Mead, country manager of HMD Global Philippines, said: “This is an exciting time for us. The Nokia 3310 is especially memorable to Filipino Nokia fans for being among the first phones that they got to experience. It brought Filipinos a lot of fun memories, from composing personal ringtones to achieving high scores in Snake and Space Impact. The phone’s long battery life made extended hours of entertainment and staying in touch with family and friends possible. More than a mobile experience, the Nokia 3310 became an essential mean to connect people.”

“This is why at HMD Global, we are committed to creating new fun memories through the new generation of Nokia phones, which features upgraded designs and improved performance while retaining the same reliability and durability made accessible across all markets.”

The classic but reimagined Nokia 3310 (in 2G and 3G-enabled versions) is equipped with a retro user interface that has been improved to deliver an enhanced, customizable experience by allowing users to change the icons’ colors and positions.

In keeping with the series’ bold and colorful heritage, the upgraded Nokia 3310 is available in four distinctive colors – the ever popular Yellow and Warm Red, and refreshingly new Azure and Charcoal hues, all with a matte finish and new silver keypads.

From September 1 to 30, Nokia fans may purchase the 2G-powered Nokia 3310 for only Php1,999 at any authorized Nokia mobile resellers and official Nokia mobile stores nationwide.

Here’s the full list of participating Nokia mobile stores, kiosks and exhibits to enjoy the price discount, fun activities and other freebies: